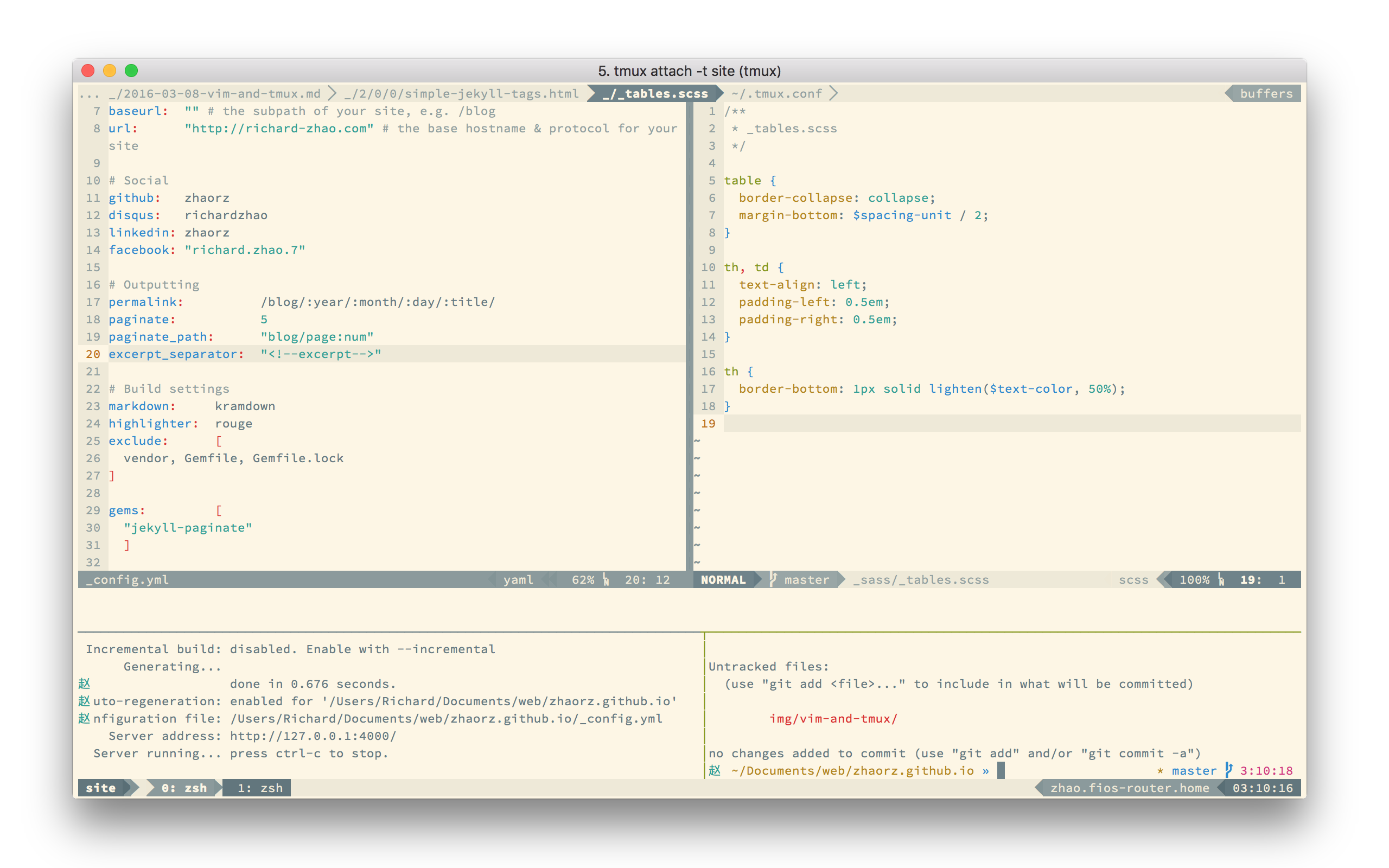 For people who like staying in the terminal, tmux will help you do exactly that.

Tmux is a terminal multiplexer. In short, it is a program that can simulate an arbitrary number of shell instances within a single process. You can have one shell running a localhost right next to another one that’s free to run git commands and keep them both in a single terminal window.

To use tmux, start a session (what is a session?) by navigating to the primary directory you want to work in and running 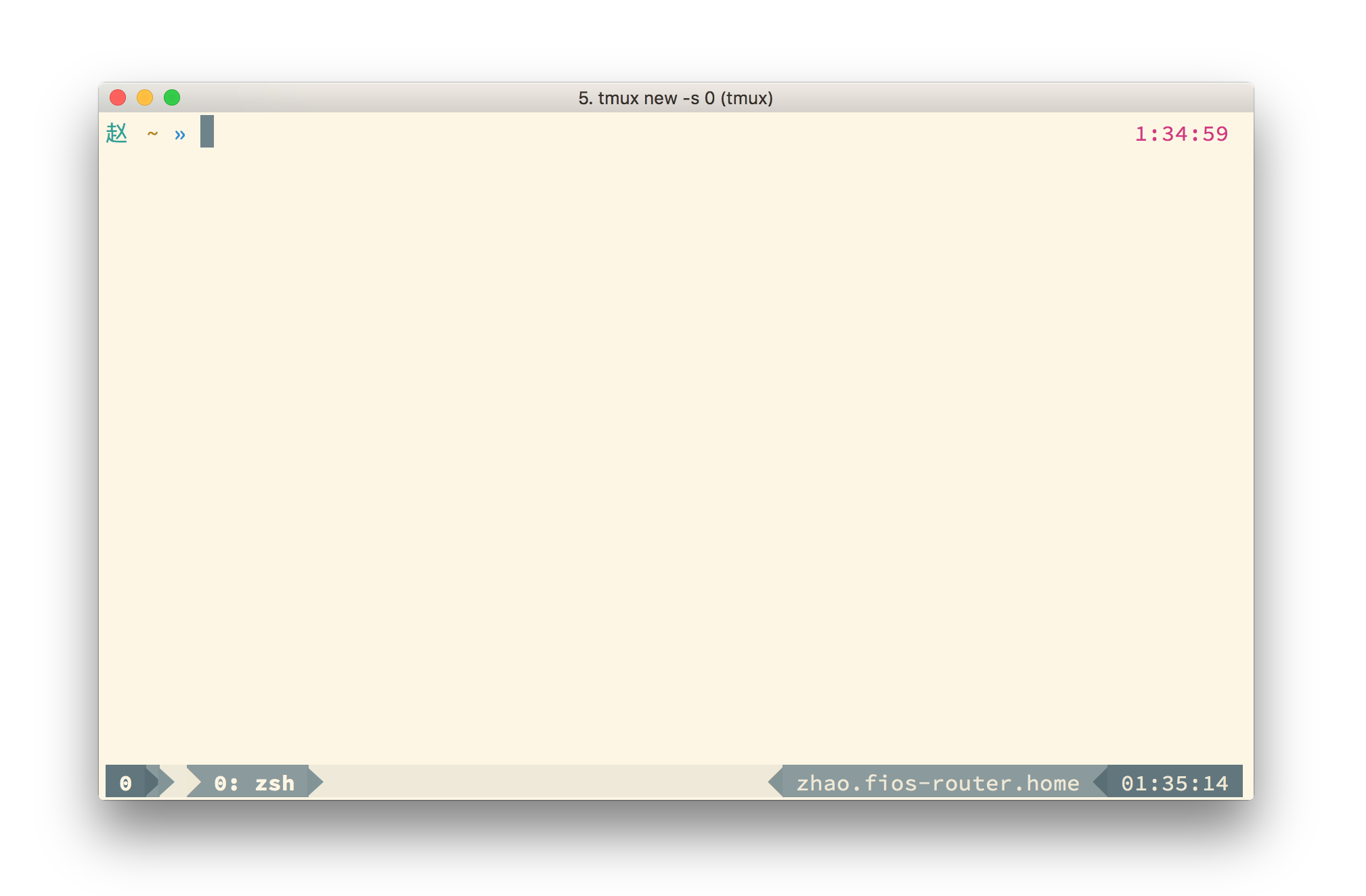 The bottom of the terminal window now displays a the tmux statusline. Yours will look different from mine, but I’ll go through how to change that later.

Going from left to right, the first “0” is just the name of the session. If you did not specify a session name, tmux will automatically assign an integer name, which starts at zero. The 0: zsh tab indicates that we are currently looking at the zeroth window in our session, which is running a process, zsh.

A session consists of one or more windows. To create another window, use the keystroke C-b c (ctrl+b then c). 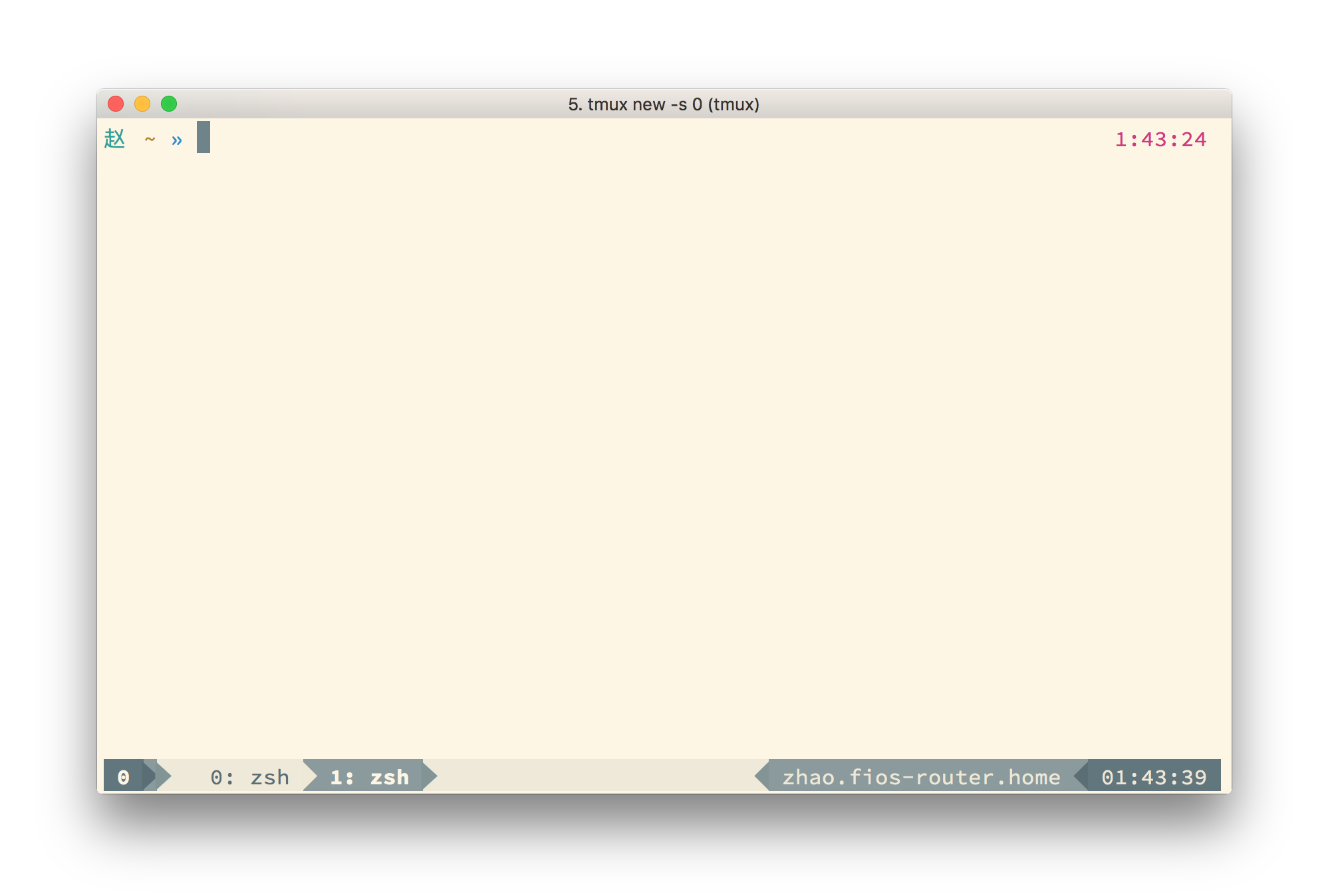 Now, you should see a second tab labeled 1: zsh (or bash/whichever default shell you use). We’ll call this window 1 (window 0 was created when we started the session).

To cycle between windows, you have the following options:

Now’s a good time to decide whether or not you like the default prefix, C-b. Personally, I prefer C-a since “a” is closer to the control key than b.

If you do want to change this, create a file named .tmux.conf in your home directory, and add the following lines in (and replace C-a with your preferred keystroke)

The .tmux.conf file is a configuration file for tmux, much like a .zshrc or .bashrc. There will be a few convenient settings you may want to add as we go through the rest of the tutorial, so you may want to create a .tmux.conf even if you decided to keep the default prefix.

Use prefix % to create a vertical split and prefix " for a horizontal split. (I’m using prefix instead of C-b or C-a for the rest of the article.)

In my opinion, these keybindings make absolutely no sense. Perhaps keyboards were a bit different when tmux was written. So lets remap them to something a little easier to remember:

On my keyboard, \ shares a key with the pipe character, |, which looks like a horizontal divider. And - is about as close as you can get to a vertical divider, so those were the keys I chose.

You can close panes and windows with prefix x, by sending an EOF symbol with C-d, or by typing logout.

The default way of moving between panes is using prefix o to cycle. If you like vim keybindings, the following bindings will allow you to use prefix [hjkl] to jump to the next pane in a given direction.

Use your mouse (only if you want to)

To detach from your current session, just run prefix d. To reattach to an existing target session, run

What is a session, anyways?

Tmux is based on a client-server model. The first time your run tmux, you start a tmux server on your computer and create a session on that server. A tmux server can host multiple sessions. A session is just a collection of tmux windows (and windows are just collections of panes).

The client in this model is your terminal window. You are automatically connected to sessions upon creation, and can connect to existing sessions using tmux attach. Clients talk to the server using sockets, and detaching from a session is simply disconnecting the client (your terminal) from the server (running on your compute somewhere). That’s why your windows and panes stay where you left them upon reattaching.

and to kill a target session

Tmux is very flexible, which makes it quite powerful. I find it extremely useful when ssh-ed into another machine. In the past, I would use multiple terminals and ssh multiple times so I could have one window to edit text and another to run commands. Now, I simply ssh once and create a tmux session. If the machine you’re ssh-ed into allows it, you can also detach from your tmux sessions and reattach to them at an arbitrary time in the future.

That was a walkthrough of some of my most frequently used tmux commands. For visual tweaks, check out my .tmux.conf on Github. You may need powerline fonts for the decorators to show up.

For more information on tmux in general, man tmux is a great place to start.