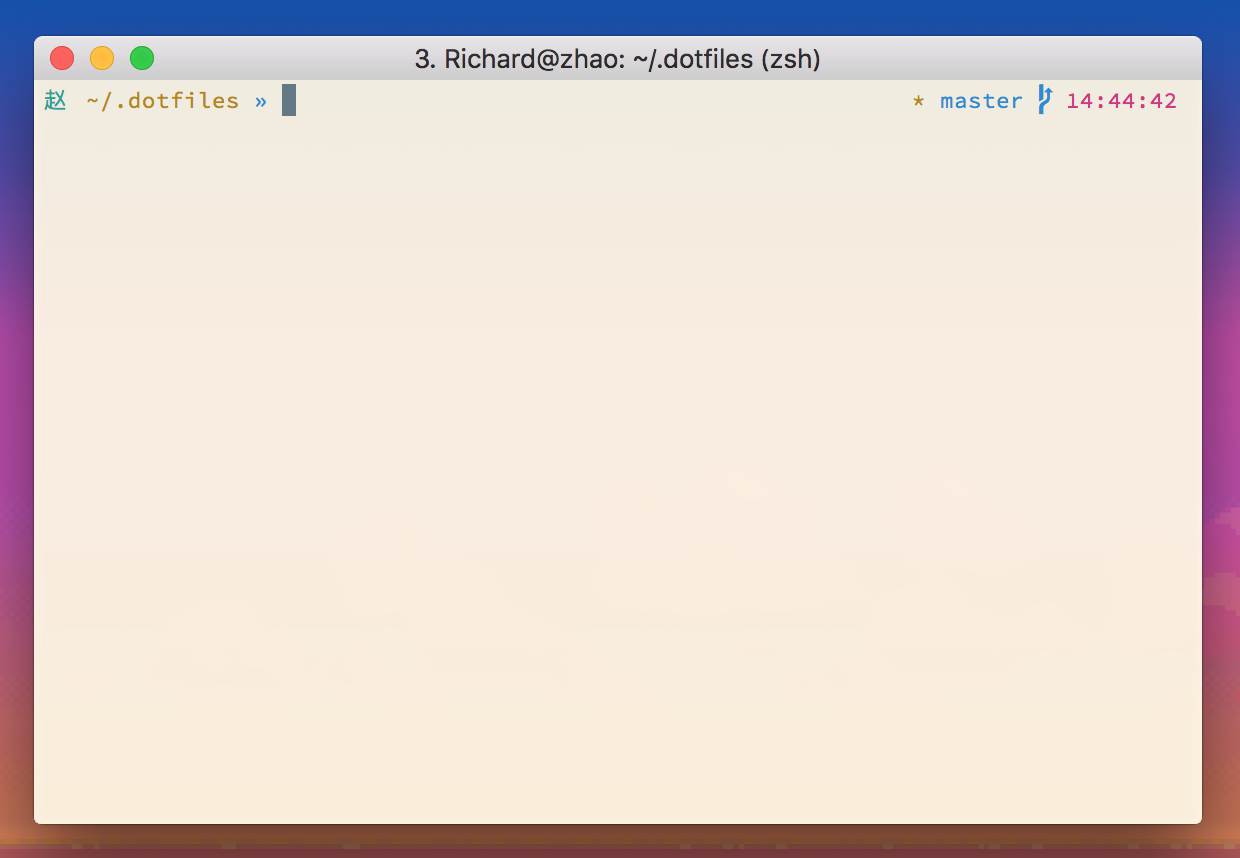 Recently, I switched from bash to zsh. Both are very powerful shells, and the differences aren’t huge. I mainly like zsh for its extra autocompletion features, but there are a variety of plugins you can install to further enhance zsh. Here, I’ll talk about prompt customization.

Customization is about adapting something to best fit your own needs. Tweaking things for personal flair is like marking your territory on something. People who customize their cars, for example, take great pride in the modifications and details they add to them. I don’t own a car. But I do own a computer, and I spend a good deal of time staring into a terminal, so I thought I might as well make it look decent.

The process of customizing things inherently leads to over-customization. In a terminal, a long prompt takes up valuable space, and may even hide important information. I narrowed my prompt to 5 elements:

Since I’m using zsh, I’ve chosen to use oh-my-zsh to manage themes and plugins. All of my configuration code is in a .zsh-theme file. My .zshrc then points to it with

And, for reference, here are the docs on zsh prompt expansions.

The hostname, path, and prompt make up the left-hand-side of my zsh prompt. These elements are what most default shells include in their prompts.

Although my computer’s actual hostname is zhao, my last name, I’ve chosen to save 3 characters of space by using the Chinese character, 赵, instead. The character actually takes up just under 2 regular characters of space, due to the way Unicode renders CJK (Chinese, Japanese, Korean) characters.

Any standard Unicode works in the bash prompt, so the possibilities are endless. I’ve seen a lot of themes use λ in place of hostname, which is pretty cool as well.

In terms of the path, I’m using the escape sequence %~. This ensures paths that start with $HOME get simplified to just ~/.... Thus, /Users/Richard/Documents gets truncated to ~/Documents. Other path variants can be found in the zsh prompt docs.

As the last standard element, I chose » (U+00BB) instead of the traditional $. return_status uses the escape sequence %? and colors the prompt accordingly.

In zsh, PROMPT corresponds to the left-hand prompt. It’s equivalent to bash’s PS1.

Zsh conveniently allows us set a right-hand prompt, without any extra effort, with the RPROMPT variable. I chose to store git and time information on the right-hand side.